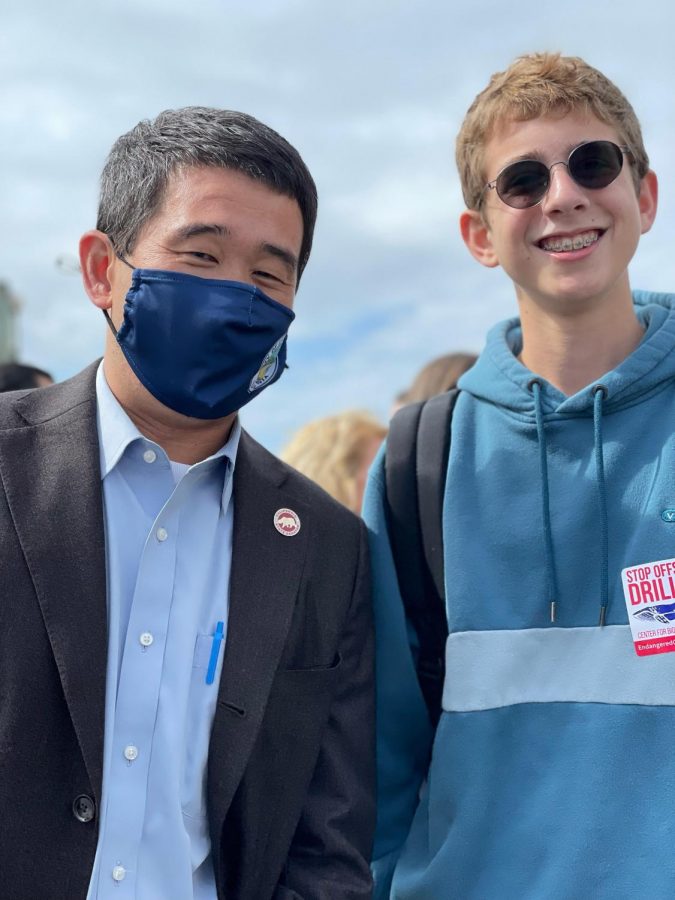 Parker Forgash (right) takes a photo with California Senator (left) at the rally at Main Beach.

On Saturday, October 2nd, a pipeline off the coast of Huntington Beach that had ruptured was discovered, resulting in over 25,000 gallons of crude oil being spilled dangerously close to our shores. New research suggests the anchor of a 1,200 foot cargo ship dragged the pipeline across the sea floor. This occurred in a storm that occurred in January. The Coast Guard first received a report of the oil spill on Friday, October 1st, but they lost visibility when they were searching at night for the oil.  This damage to the pipe is thought to be responsible for the oil spill but investigators have yet to confirm this theory.  As the investigation continues to unfold, many view this devastating oil spill as a call to action to ban offshore drilling.

“There is really no economic harm done from stopping offshore drilling in California, as it only accounts for an extremely small part of the oil in the U.S.A. and the California oil wells have been almost completely exhausted,” said LBHS student Cailin Mulvaney.

The destruction caused by this oil spill is immense. At Huntington Beach, birds and other marine life are washing up on shore covered in oil daily. While much of the floating oil can be cleaned, some of the oil has found its way to the ocean floor and into marshes. Once it is in these areas, the oil stays there forever. The effects of this oil spill will continue to impede marine life and affect our beaches for centuries to come. Offshore drilling is a constant risk to our vulnerable beaches and marine animals and many think it should be removed.

“The infrastructure of these oil platforms is dated and the yield of actual oil from them is truly miniscule. When looked at logically, it certainly is not worth the risk to our beaches and sea life,” said David Brobeck, advisor of FLOW Club, an organization founded upon the idea of promoting student stewardship for the environment.

On Monday, October 18th, a rally was held on Main Beach in response to the oil spill. Many California senators, as well as activist Jane Fonda, attended. FLOW club members from our school were able to attend this protest as well through Mael Matis, who organized this rally with the support of Jason Alleman and David Brobeck .

“After attending the rally, I became aware of how preventable the oil spill really was. The way the offshore oil drilling industry is run, this was a disaster waiting to happen. This oil spill is yet another sad example of corporations prioritizing profits over the health of the community and of the environment,” said junior Isabela Reichel.

Many speakers discussed solutions to dangerous offshore drilling. Influential speakers such as David Min proposed real changes and outlined the next steps that need to be taken in response to this oil spill. These speakers inspired FLOW club students in attendance.

“The press conference furthered the notion that we can use our voice to share our disdain for offshore oil drilling, which inevitably results in oil spills. In this way, I feel as though my perspective on preventing oil spills became more optimistic, seeing so many activists of all ages and policy makers ready to create change for the betterment and conservation of our damaged environment,” said FLOW Club member Mila Rafaty.

For many, the next steps are clear: legislation needs to be passed to ban offshore drilling to save Laguna Beach and every beach community. The division caused by polarizing political parties often makes enacting legislation very difficult; however, the need for legislative action is urgent.

“Oil rigs need to be decommissioned. Republicans and Democrats: we all live in Laguna for a reason — and the reason is our beautiful ocean and our unique and fragile Laguna coves and beaches,” said Brobeck. “From a purely financial standpoint, it’s our beaches that bring tourism dollars into our town. There are many, many practical reasons why we need to actively protect our coastline.”