Eliminating Microaggression from our everyday lives 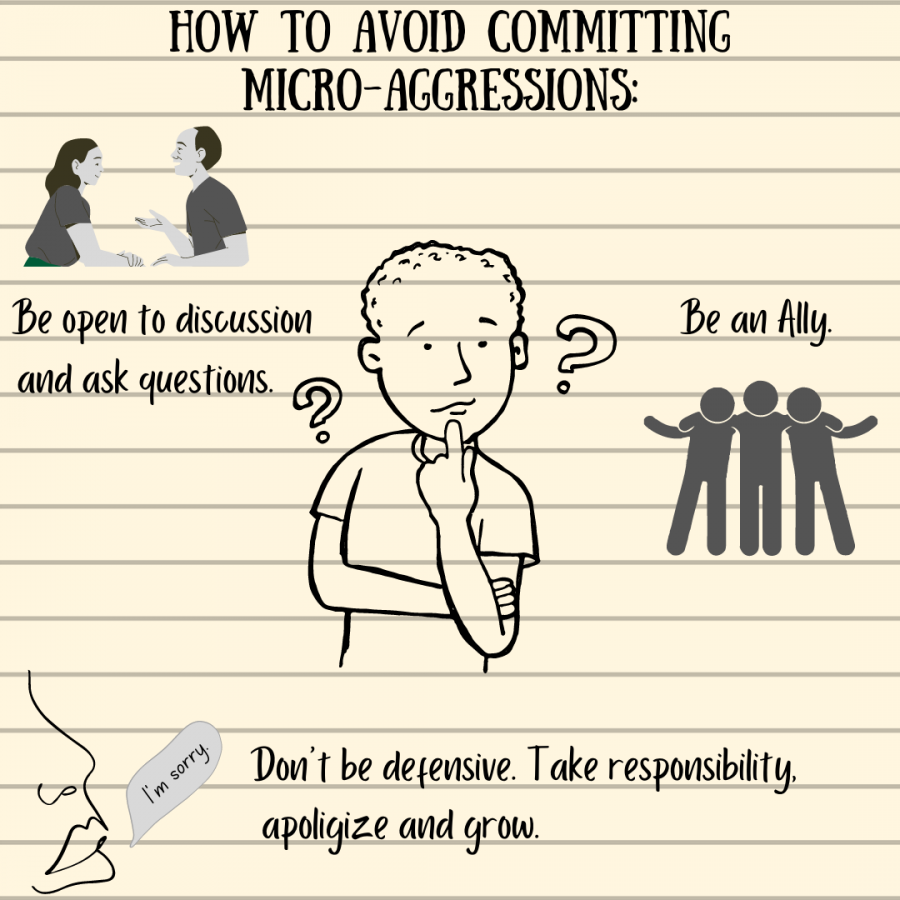 “No, where are you really from?”

“You speak good English for a …”

Stop right there. Whether you meant it or not, whether it was just a joke, or whether you honestly had no idea, you just committed a microaggression: a verbal, behavioral, or environmental offense that communicates hatefulness towards a person from a marginalized group. At first, these comments do not seem harsh or violent; however, at their core lies a hidden meaning packed with subtext. You might as well have said, “You are not American” or “Homosexuality is weird” or “It is unusual for someone of your race to be intelligent and so well-spoken.”

While hate crimes are direct acts of discrimination, microaggressions are often subtle, cloaked as compliments, and defended by the typical excuses: “Oh, I didn’t mean to be rude” or “Relax, it is just a joke.” The truth is, these expressions are harmful. They continue to give power to privilege and widen the gap between the oppressed and the oppressor. Unfortunately, microaggressions are no longer a threat. They are lethal. According to recent studies, microaggressions lead to increased stress, depression, trauma, anxiety, and even heart disease and type 2 diabetes amongst minorities. These smaller acts of discrimination have even caused minorities to lose trust in caregivers and doctors, only putting more people’s health at risk.

To put this into perspective, we all know the toll that stress puts on our bodies. Whether it’s meeting deadlines, juggling busy schedules, or even sitting in Main Beach traffic, we experience stress every day; however, those on the receiving end of microaggressions are forced to carry even more stress on top of it all. It is this added weight from those relentless verbal jabs that burdens a person’s heart like a deadly disease and eventually spreads to every limb and crevice of their body.

We can’t continue ignoring microaggressions — no more passing them off as exercising our first amendment right and turning the accusation around, claiming the victim is too sensitive, especially when microaggressions hit too close to home.

“Honestly, microaggressions are hard to catch since I’m so used to them now,” said sophomore Madison Duong, Brush and Palette’s Public Relations Manager. “[They] go to show that there are other acts of racism besides just physical. People are starting to recognize that this type of language and casual racial insults are serious. Even though it’s a tough discussion, I think it’s really important for everyone to broaden their perspective and start uprooting these cruel comments. That’s the first step in combating the AAPI hate crimes.”

Whoever still believes in the sticks and stones nonsense, where words will never hurt, is choosing ignorance and failing to venture outside of their own lives. Racism and microaggressive comments are diseases that plague our small community, our country, and the rest of the planet. The frustrating part is that we have always known the cure, but we are reluctant to take the anecdote and cancel out the poison that runs deep down in the roots of human civilization. The cure for racism resides in everyone. We just have to make the effort.

Please take additional time to explore the extent to which you may have played a role in damaging the self-worth of others. Watching “Microaggressions in the Classroom” is a great place to start; set yourself aside for a few minutes and listen to those who have been hurt by the carelessness of others. It is time for us to grow, learn from our mistakes, take ownership of our actions, listen to people’s stories, and eliminate microaggressions from our everyday lives.