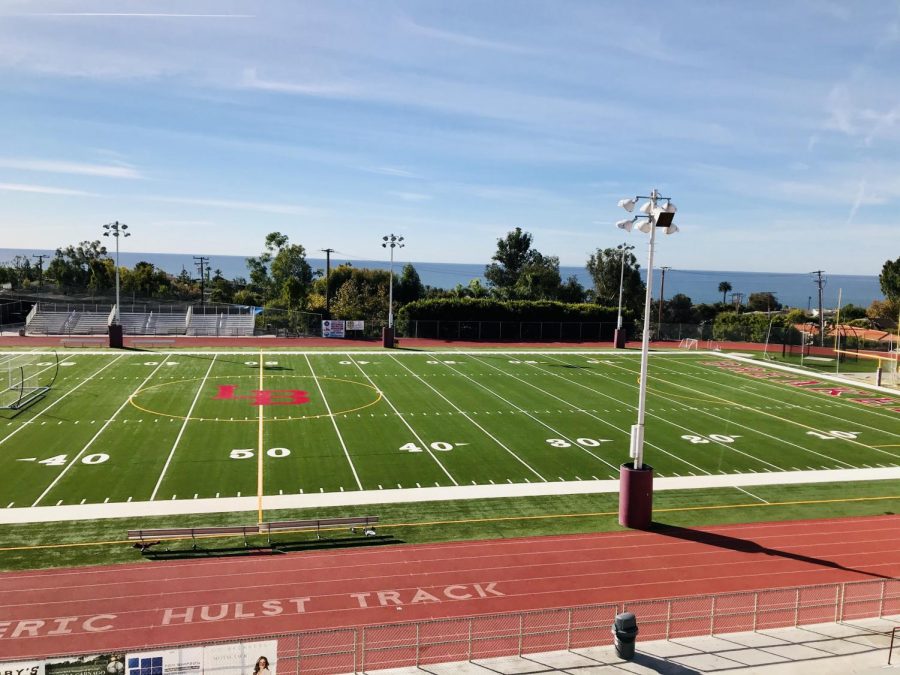 As many teams have limited practice schedules, the track and field remain unoccupied frequently throughout the week. Prior to Thanksgiving, teams were transitioning to less restricted practices, which allowed some shared equipment, but the rise in cases halted that transition for the time-being.

As COVID-19 cases surge, Fall sports seasons hang in the balance. Competition was originally scheduled for mid-December 2020, but the California Interscholastic Federation (CIF) has postponed Fall sports seasons until 2021. The California Department of Public Health (CDPH) still has yet to release new youth sports guidelines, so CIF cannot provide competition dates at the current time.

“They have also canceled State Playoffs for Fall sports in hopes of allowing more flexibility for all CIF Sections in the State to push back and extend their window for competitions,” said Athletic Director Lance Neal via Parent Square. “This does not impact our current practices but it will cause our Fall official sports start dates to be adjusted. We will be revising our calendars and competition schedules when official start and playoff dates are released.”

Along with a potentially shortened season, all sports have had to adjust their practices in some way to comply with COVID-19 protocols, and not being able to conduct proper practices, not to mention possibly not playing a season, could hurt players’ opportunities at the next level. Additionally, fewer practices could hinder an athlete’s in-season performance.

“Shutting down sports would be very detrimental to my athletic improvement and to my chance of getting recruited this year. I hope that we can continue to practice and weight-lift,” said junior water polo player Nicole Brown.

Beyond recruiting and practicing concerns, athletes fear not being able to rightfully finish their careers.

“This will probably be my last opportunity to play organized basketball. I’ve been playing with my teammates since leagues at the boys and girls club. We’ve been thinking about and looking forward to our senior season since elementary school, so not being able to play this year would be heart-wrenching,” said senior point guard Willie Rounaghi. “Our team has had some success the last few seasons, but it always felt like we were building up to this year, where I think we could do something special. Obviously, the health of the community takes precedent; nonetheless, this is a tough situation to be in. I hope smart decisions are made by all individuals to stop the spread and, consequently, allow our season to be played.”

Dealing with hundreds of thousands of student athletes and 10 CIF Sections, the California Interscholastic Federation faces a daunting challenge with reopening California high school athletics. COVID-19 cases continue to arrive by the tens of thousands each day in California and by the thousands daily just in Orange County. Positive tests are sure to affect high school sports.

“With the rise of COVID cases, a delay in starting the season was inevitable. Hopefully, moving forward, people will start to limit their activity so we can get cases under control and at least get in a partial Fall season,” said Neal.

Sharing the same safety concerns as players and parents, coaches and administrators are doing their best to ensure that seasons occur.

“The biggest concern is just having a season,” said head Cross Country coach Scott Wittkop. “We know it’s not going to look the same as a normal year. We have had to implement social distancing and masks, but besides that it’s been the same as usual.”

Seasons will likely be truncated, and cancellation is within the realm of possibility. The current circumstances are certainly frustrating, but players, coaches and parents must comply with guidelines to protect others and if there is to be a season.

“Try and keep a positive attitude about things, and do everything you can to keep those around you safe from COVID. I have been in public education for almost 30 years now, and this is, by far, the most challenging situation we have seen in education. It will pass, but our resilience is being tested,” said Neal.