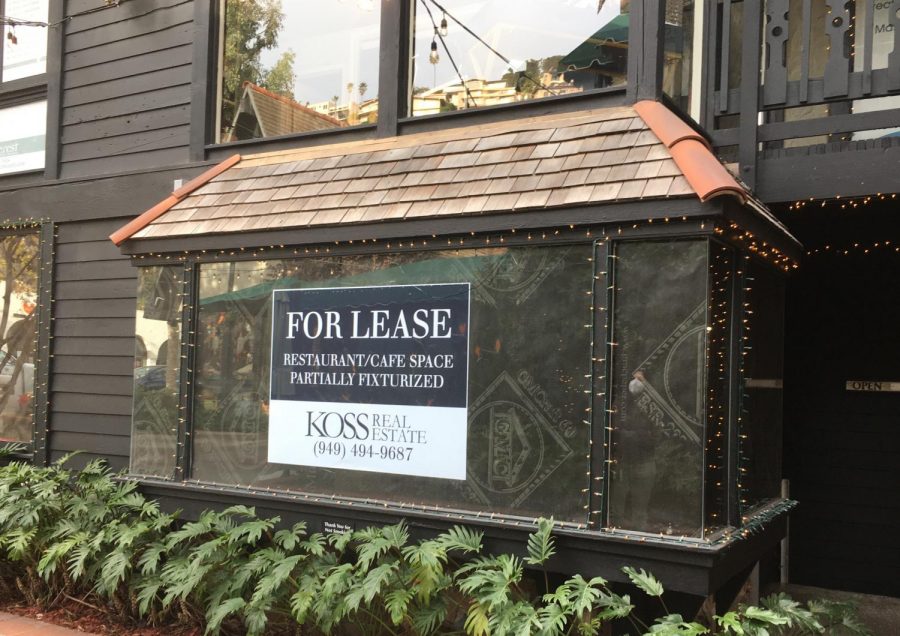 The Grove sits empty with boarded up windows and a For Lease sign. The Grove used to be a key cafe in Laguna. Soon, the majority of our previously beloved places will look like this without our help.

It’s no secret that COVID-19 has taken a huge toll on the world’s economy. Consequently, Laguna Beach has seen the closure of many of our favorite places. The Grove, despite being a popular and widely-adored cafe on Forest Avenue, closed down amid this harsh economic atmosphere. Practically all of Laguna Beach businesses are similarly struggling to stay afloat. It is crucial for every citizen to understand that ALL of our businesses are extremely vulnerable right now and need our help to survive.

“Financially, it has been pretty devastating with no income, 16 employees and a huge rent. Overall business is down 60-70%,” said OM Laguna Beach owner Lori Kahn.

OM Laguna Beach is a yoga studio on PCH that is suffering amid the pandemic. Indoor businesses like gyms, shops and restaurants have been hit the hardest. To counter this, the city council has been working with some of these establishments to add outdoor venues, a crucial necessity during these trying times.

“After speaking with the Laguna Beach Restaurant Association, I soon realized that many restaurants were going to need outdoor space because even if the restaurants were allowed to serve 25 or 50 percent indoors, that’s not enough to be viable for their business,” said council member Sue Kempf.

Spaces all over town have been used to make room for the venues. For example, parks are being used for outside yoga and curbs for outside dining. Many temporary-use permits have been issued by the city. These permits are the same as those that are typically issued for the Christmas tree lot in the canyon; however, instead of being limited to the winter, they are being granted to businesses for the duration of the pandemic. One significant movement for additional outdoor dining space was the Promenade. This closure of Forest Avenue has brought about a great deal of foot traffic to the downtown area and prompted the move to outdoor dining for many restaurants all around Laguna.

“Forest Avenue is a marquee street in our downtown, and there are four restaurants there that were all probably going to close due to their limited capacity,” said Kempf. “Once we closed Forest Avenue and opened it up for outdoor dining, then outdoor dining proliferated across the city because restaurants started taking advantage of our Temporary Use Permit process and moving outside.”

According to survey data provided by CEO Chamber of Commerce Paula Hornbuckle-Arnold, in a poll of 1600 people, 96% voted to keep the Promenade permanently, even after the pandemic passes.

Despite overwhelming support of the Promenade, the idea to close Forest Avenue did meet some criticism.

“While the majority of our citizens were in favor of the Promenade, some of our locals who are opposed to changes were not in favor of the closure of Forest Avenue, and we had three businesses in the downtown area who were also opposed,” said Hornbuckle-Arnold.

In addition to moving outdoors, alterations have been made to all business models to make them safer for COVID-19. These precautions include disinfecting everything, requiring masks and enforcing social distancing. Some businesses even go above and beyond these protocols. One such business is OM Laguna Beach, which has limited the capacity of their classes and gives out free masks. Lumberyard and Slice Pizza, both owned by Cary Redfearn, use plexiglass between each table and have implemented hands-free sanitation devices. Buy Hand has been utilizing its two doors to provide ventilation throughout their store.

The Cliff, operated by Andrew Turula, has the benefit of already being an outdoor restaurant. Nonetheless, management has also made extreme changes to operations. They entirely rewrote their policy for their staff to include temperature checks, gloves, as well as a screening process for every customer. This process is so meticulous that after a server touches anything a customer has touched, the server immediately sanitizes and changes their gloves.

“We pretend that every guest has COVID-19. If you think that everyone is sick, you’re going to make sure that you do your best to follow safe practices and might not get it,” said Turula.

However, the majority of these new precautions are now of no use as we move into the purple tier with California’s Regional Stay-at-Home Order that went into place last Sunday night.

“Sadly, four days ago we were shut down again with the new ‘purple tier’ restrictions, and are back to 18 ‘livestream’ only classes,” said Kahn. “The business was just beginning to gain some ground in September and October with more people showing up in the studio than on livestream, so we are once again seeing a backward slide in attendance.”

This new stay-at-home order is crushing businesses. Lumberyard and Slice Pizza have had to furlough 60% of their staff. The Cliff laid off 78 people last Sunday. There’s also a ripple effect because restaurants have fewer customers, so they are buying less product from suppliers who are therefore suffering by extension. The Cliff had initially planned to allow guests to utilize a few tables at their venue but without service. Essentially this would be like getting takeout from a restaurant and eating it at a park, except there would be an added incentive to get takeout at The Cliff because then you would get to enjoy takeout food with their amazing views. However, the city gave the warning to every business stating that “Tables, chairs, and umbrellas shall be removed from parklets and eating areas shall be cordoned off to prevent use after 11:59 p.m. on Sunday, 12/06/2020” among other restrictions. The Cliff will begin to serve takeout Fridays–Sundays from 9 a.m. to 7 p.m.

“The new orders are killing us. There isn’t enough takeout business in town to support us staying open during the weekdays,” said Turula. “If this lasts more than three weeks, we might not make it. I don’t know how a lot of the smaller places are going to make ends meet. It is getting very tough.”

Restaurants are not the only businesses suffering after this new order. Eliminating these social outings also diminishes the foot traffic around all local shops. One such shop is Buy Hand, a retail store on S. Coast Highway that has discounted all of their products 30% in an effort to keep their doors open.

“Even before the virus, retail sales were a secondary activity for people after their primary activity of going to a restaurant. Now that won’t happen,” said Buy Hand owner Vidya Reddy.

All of our local businesses need immense support right now. Don’t let any more of our favorite places close. Do your part by adhearning to CDC guidelines and putting our city first.

“You just have to wear a mask. Everybody needs to wear a mask now. There’s no mystery to any of this,” said Kempf. “We’re trying to get the word out for people to spend money downtown. When they need to buy stuff, they should think about Laguna first and see if they can buy it in our town.”