Laguna’s response to wildfires and how we can prevent them 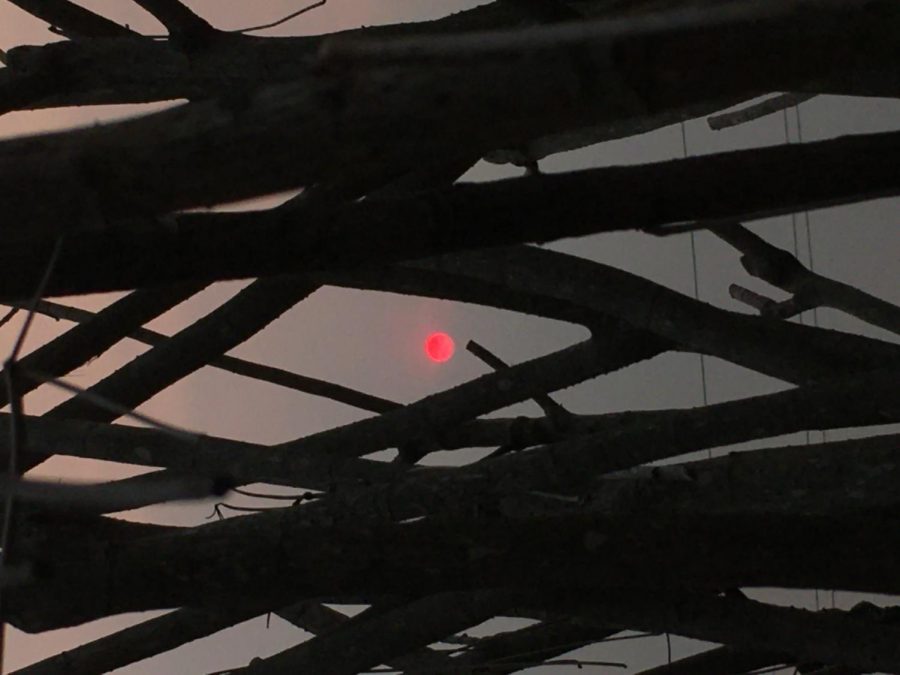 Breaking news! It’s a boy! It’s a girl! No, it’s one of the biggest wildfires in the history of California. On Sept. 5, 2020, at approximately 10:23 a.m., a smoke-generating pyrotechnic device, employed for a gender reveal, started the enormous El Dorado Fire at Yucaipa. Though this fire was approximately 88 kilometers away, Laguna Beach still saw the effects of the fire. A thick cloud of smoke covered the sky, and the sun was visible with a dark and eerie, orange glow.

“I went outside to walk my dog, and the sky looked like it was straight out of an apocalyptic movie,” said sophomore Alea Dillow. “After about ten minutes of walking, my nose and throat started to burn a bit, too.”

Multiple wildfires like the El Dorado Fire spread across the state this summer. For example, the Bobcat Fire has burned more than 114,000 acres, and overall, the 2020 wildfire season has led to over two million acres burned state-wide. The devastating Complex Fire burned the coastal range of Northern California and many counties. This fire has made history as California’s first modern gigafire. A gigafire is identified once over one million acres have been burned by that fire alone. It started as 38 smaller fires caused by lightning strikes that combined to make this huge fire. This raises the question: How does a fire spread so quickly? Laguna Beach Fire Marshal James Brown outlined factors that provoke spread.

“Fuel moisture is the biggest factor. We can have a relatively cool day, low wind, but if there is really low fuel moisture, the fire will want to spread quickly,” said Brown.

Fuel moisture is the amount of water in vegetation (fuel) that is present in a fire. When a plant is very dried out and does not contain much moisture, it can amplify the power of a fire. While it feels like all fires in this state are uncontrollable, really only a handful become as large as the ones recently raging across our state. Along with wind, other factors such as temperature, slope and dead shrubbery can contribute to fire spread. These factors are not always present, so while it feels like every wildfire right now is blowing out of control, that’s not the case.

“There are some circumstances when a wildfire doesn’t spread at all, and you never hear about it because it never gets out of control. We have had at least 5-10 fires over the last few years that most residents haven’t heard about because they went nowhere,” said Brown.

There is an undeniable, scientific reason for this increase in wildfires. Carbon dioxide released by cars resonates with infrared light in the atmosphere, causing heat to be released. This occurs on a global scale, contributing to climate change. Plants do not adapt quickly to this and begin to dry up. When a wildfire starts, either by a human, lightning strike or intense heat, all this dried material allows the fire to spread incredibly fast. Thus, the fires get bigger than they would have without these helping factors.

“Built up dead vegetation will create a lot of fire and a lot more heat. You hear about this a lot in the forest, in the Sierras,” said Brown.

Wildfires raging across California are creating smoke that have affected Laguna Beach. Our LBHS sports teams took precautions due to fires negatively affecting air quality. Athletic Director Lance Neal implemented the usage of an app called IQAir to judge the precautions sports need to take when practicing. Mr. Neal outlined the four levels of air quality listed on this app and how they modify practices to make them safe: 1. Good (no modification needed), 2. Moderate (running reduction), 3. Unhealthy for sensitive groups (made workouts optional for some people), 4. Unhealthy (cancel practice).

“We follow the guidelines given to keep everyone safe,” said Neal.

Many athletes have been affected by poor air quality and are grateful to the school for their accommodations.

“I think sports are handling this situation well since they alert us when there is bad air quality and advise us to stay home,” said sophomore athlete Micah Chavez. “The days where it is bad to where the coaches feel like it’s not bearable or healthy for the athletes, coaches just cancel the practice.”

There is an obvious risk for students with breathing problems such as asthma, but the school has taken adequate measures to ensure that student health isn’t in danger.

Along with dealing with poor air quality, all citizens of Laguna must consider the threat wildfires pose to our community. There are many ways to reduce the risk of fires in your own house. Spreading awareness about fire prevention is also a great way to prepare our community.

“Go look at your landscape, first and foremost, and see what you can do to make the landscaping more safe,” said Brown. “Our department has a service on the website for a free consultation. We send a fire engine out and the crew comes out to walk the whole house. They’ll look at the yard, the house, the decks and the roof to offer suggestions.”

In other communities state-wide, over 100,000 people have had to evacuate their homes, with the fire destroying structures, fatalities occurring and people gone missing. Fires are extraordinarily dangerous, and considering our proximity to many fires, we must begin preparing for the inevitable. It has never been more important to follow proper procedure in the event of a fire. These steps include listening to what the firefighters and police advise the public to do, especially regarding evacuation protocols.

“The first priority is protecting life, not structures. We will abandon saving a structure to save a person instead,” said Brown. “Staying at home is worse because it takes the resources of firefighting and shifts them to the purpose of life saving. Be prepared to leave, and know what to do to get quickly out of your home.”

Other Helpful Links (Sites in General):