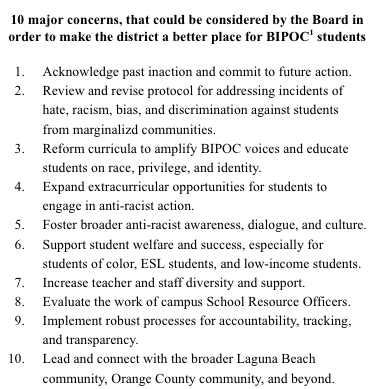 On Aug. 1, 2020, a group of LBUSD alumni publicized and distributed a thorough letter to request that the School Board take action against racism. After receiving over 250 signatures and multiple testimonies from current students and alumni, the letter was sent to the School Board on Aug. 10, where it was met positively.

“I thought the letter was very well-spoken! Passive racism has been an active issue in our town for a while now, and I can appreciate that the LBUSD alumni are willing to combat these issues,” said current LBHS senior Jacob Kuiper. “I have heard stories about incidents in our town revolving around racism and how people of color have spoken out about it. Since our school has a lack of diversity, we must educate students about race and how people of color can be treated.”

The letter’s main purpose was a call to action for the School Board to take a formal stance regarding systemic racism in the United States. An anti-racist stance goes beyond multiculturalism in that it acknowledges the history of white supremacy and its continued effects in our society today. The letter also pointed to the different ways racism exists in our district, using testimonies of witnesses and victims of racist acts. The alumni also addressed a menu of options, including 10 major concerns, that could be considered by the Board in order to make the district a better place for BIPOC1 students. In its study sessions, the Board expressed some alignment with the “actions” the alumni mentioned and has been working to develop new anti-racist policies. Their intentions, overall, match the actions the alumni indicated in their letter to the Board.

“The Board members acted with great care, sensitivity and openness in their discussion of anti-racism and their review of the anti-racist resolution,” said LBUSD Against Racism member and LBUSD alumnus Aviva Meyers. “I’m thrilled that they included some of our letter’s suggestions – or ‘Actions’ – in the new draft of the resolution, such as convening an anti-racism task force and collecting data on the results of their anti-racist efforts.”

As the BLM movement continues, a greater number of people are becoming aware of the illogical inequality that exists in society, and more is being done. Multiple parents, students and staff members have spoken up and affirmed the need for more diversity throughout the curriculum.

Racism is everywhere, whether we recognize it or not. It is ingrained in everything from political policies to law enforcement practices. Racism exists in Laguna Beach. It is the responsibility of the community to come together and try to erase it. Because most of the high school student population is non-BIPOC, increased efforts must be made collectively as a school community to ensure that the perspectives and experiences of all students are not overlooked.

“I think racism was also manifested, [in the LBUSD], in a lack of awareness of race-based privilege, and how racism is embedded in our nation’s history and continues today. And racism is entrenched in our district just by virtue of this being a well-funded, majority-white district and community with wonderful educational opportunities, while other communities in Orange County and beyond do not share in the same privileges,” said Meyers. “Overall, I think people in LBUSD who engaged in or allowed racist behaviors were more ignorant than bigoted. But that ignorance is exactly what needs to be addressed.”

These LBUSD alumni made a major impact that’s going to benefit BIPOC students, or rather all students for years to come. If every student, teacher and staff member of the LBUSD committed to anti-racist ideals, we would be able to make Laguna Beach a great place for everyone. As of Oct. 8, 2020, the LBUSD School Board has officially passed a resolution declaring our district actively anti-racist. Only time, and arguably our community, will tell of what happens next.

1BIPOC is an acronym that stands for Black, Indigenous, and People of Color… BIPOC is meant to emphasize the particular hardships faced by Black and Indigenous people in the US and Canada—especially because Indigenous people often get forgotten in social justice causes and that anti-Black racism is particularly virulent. – Dictionary.com

To see the full letter, please go to https://lbusdagainstracism.carrd.co/ There you can also share your story if you’ve ever witnessed racism in the LBUSD first-hand, and you can sign the letter. Testimonials are very important to help the cause, so please feel free to share your story! When you go on the link, scroll down to “Make Your Voice Heard” and click “Share Your Testimony.”