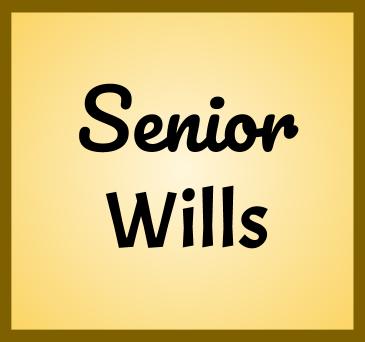 Claire Wittkop: To Carly Rohrer, I leave behind my ability of being able to spend hours on the newspaper by myself  when no one else shows up to late nights.

Isabella Peterson: The red mini to Audrey Sutton, my Patagonia collection to Mateo Bianchi, and my heart to Arthur Rounaghi.

Tessa Blanchard: I would like to leave Shea Blanchard all of my determination so he tries harder in baseball and becomes amazing

Hailey Cortez: Spencer Kelly; although it is hard for you to find motivation currently I hope to see a light start to flicker as mine did in my Junior year.

Geste Bianchi: I will leave my volleyball team to booker;(

Ethan Ghere: To my younger brother Carter, I leave behind my knee problems.

Andrew Shutts: I give the keys to the Business and Economics Club to Matt Berk. Don’t let me down.

Kendra Nugent: My old, backpack that I spilled yogurt on. Care for it well.

Luka Salib: I leave my amazing dance moves to joe hovanesian, my rugged good looks to harley firouz, and my unfullfilled desire to buy a pet frog to claire tigner.

Charlie Besso: Harley Firouz- my soul and my mother Sarah

Gabrielle Pontius: I would like to leave my ability to capture senior year through a disposable film camera to Izzy Saunders and Ayda Tuncay. Carry on the legacy!!

Anthony Ramirez: A spoon. Some of them always be forgetting spoons for their cereal!

Logan Leeds: I would like to leave behind the Creative Writing club I co-founded, and am the current president of to my few fellow members. May they create things I can only imagine in it.

Staci Ensminger: I leave behind my flexibility to the Dance Company.

Russel Farhang: dont kill yourself over high school college is what matters.

Kendall Fraser: I’m really going to miss playing volleyball with Sophie Reavis, she is an amazing person that I am so lucky I got to meet and become close friends with through high school volleyball.

Lily Owen: Not physically, but just letting her know that I hope she has a great senior year! With no drama and only filled with fun times and good vibes.

Zoe Waters; I’ll be leaving behind my little pink locker table to my sister, Alex 🙂

Grace Houlahan: I leave behind my 30 minute parking spot to Ava Houlahan and Molly Renner. You guys can fight over it now.

Riley Russo: I leave behind the LOAT tradition to Ella Dartez and my Dance Company activity planning duties to Izzy Saunders!

Piper Naess: I would like to leave behind our amazing neighbor Jason to Macy Draper

Bryanna Rodriguez: I leave behind my two brain cells to my hermano Brandon Rodriguez. Hopefully they’ll help you out, stay focused!

Moorea Pike: I would leave behind some money for the vending machine to Audrey Abrahams and Gavin Pike.

Fernando Alonso: live life to the fullest bruh bc once you 18 you cant DO SHI

Adam Joyce: My little brother’s already getting everything XD

Luke Yates: I’ll leave Christian Yates some stuff when I move out.

Drew Fink: I leave my 2001 Toyota Sequoia to Harley Firouz and my timeliness Claire Tigner

Cambria Hall: I would like to leave behind my bad spelling and sports legacy to Chase Hall and Ella Tyus.

Sammer Tarazi: For my sister Dahlia- don’t be lame

Jayd Sprague: I leave behind my work ethic and front seat in the car to my sisters Jordan and Gia and my brother Dylan.

Morgan Falkowski: I leave my collection of One Direction magazines to Sydney Schaefgen, and my running shoes to Nina Rogers.

Camila Reese: my attendance rate, to my brother.

Eastyn Cianto: I leave my pink cheetah leggins and position as parade leader to Brooke Hardy.

Connor Fink: I leave Cooper Buckhorn my #9 and Connor Fink Time, and Kanoa with my bunnies.

Karmen Schmidt: I leave that one spot in the church parking lot to Ella Dartez

Brady Soloff: I leave my TI-84 plus calculator to the next struggling calculus class.

Sophia Seidensitcker:To the guys (they know who they are): take care of each other.

Jade Petrovitch: I leave my teen angst to Rye Sandefur.

Jackson Yelland: Being a PO to Ryan Strickland

Sara Jacobs: I leave my tardiness behind to Ashley Nobles and Audrey Sutton.

Kenneth Chu: I leave behind my right shoelace to Henry Stewart to defeat True in the next xc season.

Will Potratz: I would like to leave my role as star of the basketball team to Nolan Naess

Annamarie McIntosh: I leave all my musical and disney memes to Hannah Le (who is a STAR).

Cirafina Biele: I leave behind my DRIVESSS playlist and my impeccable taste in boys to Maya Vidas.

Jack Crawford: My insane speed on the field to Evan Louch

Catherine Keyser: To Claire Tigner, I leave a special dent of my own making on the Drum Major’s mace.

Alex Lemus: Yes, to one of my friends she’s very kind and loving. I’ll always be here for you if you need anything

Avalon Brice: I leave behind LBIMUN to all my favorite classmates in MUN!

Malin Glade: I leave behind my affinity for large age-gap friendships to Lila Goldstein, my ability to organize dysfunctional ENFPs to Claire Tigner, and my free-style rapping skills to Joe Hovanesian.

Brooke Beresford: All of the grade-saving Quizlets that I used throughout high school

Jackson Jenkins: I would like to leave behind my chem notebook.

Wes ABrahams: My muscles to Chase Hall, because he needs them

Gabrielle Denny: Sister Tash – You will always be mature and a leader for the people around you. Continue to do whatever you want and do not think about what anybody around you says because it’s probably nonsense. Don’t think you have to go to a huge school after high school and don’t ever think you are less than because you are such a gem. Love you, gab.

Omid Samanifard: The only thing I would probably like to leave behind are probably my notes from my classes that they could use for studying.

Grace Peterson: If I left something behind to my underclassmen friends, I would leave copies of the books I’ve read with notes and highlights all over them to spark a new love of reading.

Dylan Davis: I’m leaving behind the number 1 locker to Tyler Feilds once he is a senior.

Madi Garwal: I leave behind the job of annoying Brianna and Coach to Sophie Marriner.

Holden Geary: To Ethan Porter I leave my waffle maker so he can make waffles.

Angelina Dyrnaes: The piccolo to Katy.