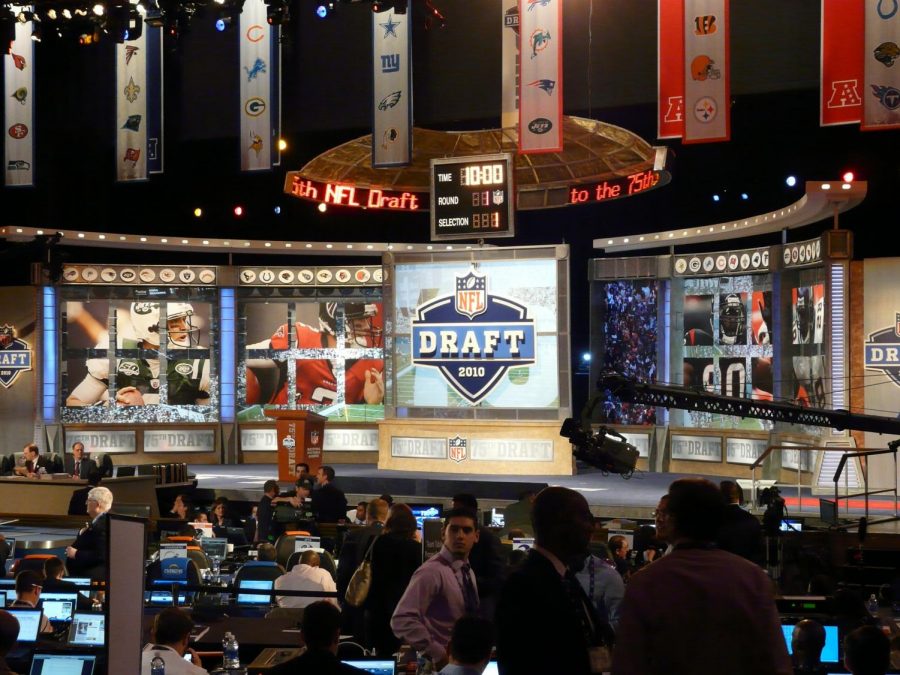 In past years the draft has been held in person in places such as Radio City Music Hall. This year, due to the Coronavirus, the draft will be broadcasted from home.

The first of the at-home drafts will start Thursday, April 23, 2020. This year the draft is notoriously wide receiver heavy. At the top, there are a few sure picks, but beyond that, who gets picked is somewhat up in the air. These are my picks and explanations for the first 10 draft picks of the 2020 NFL Draft.

There was some speculation that the Browns might trade their pick and take Tua Tagovailoa later on in the draft. That is unlikely, however, as teams don’t tend to trade away a shot at a franchise quarterback. Joe Burrow emerged as the best quarterback in the draft during the college season and it seems like a no-brainer for the Bengals at number 1.

Chase Young is the best overall prospect in this year’s draft. Young’s size, power and speed is hard to pass on. He had a dominant 2019 college season, apart from not being a factor in the playoff loss to Clemson. He is a franchise-altering player.

In a trade with the Detroit Lions, the Dolphins move up to number 3 to acquire Tua Tagovailoa. The Dolphins give up a few of their first round picks, but they are getting their franchise quarterback. Tua doesn’t need to start right away as he heals from a hip injury.

Having Saquon Barkley and Daniel Jones, the Giants look to aid their young offensive weapons. They will let Isaiah Simmons go in order to benefit their offense. Getting a big body for Saquon to run behind and for Daniel Jones to pass behind will greatly benefit their team.

After dealing Darius Slay in the offseason, the Lions need to make up some ground in the secondary. Jeff Okudah is the best defensive back in the draft, and the Lions will gain multiple picks by trading back to take the same player at number five.

Many think that the Chargers take a QB at number 6; however, the Chargers have potential to become one of the best defenses in the NFL. After limiting reigning MVP Patrick Mahomes to under 200 yards twice in 2019, the Chargers have a chance to add to a defense that already boasts Derwin James, Nick Bosa, and Melvin Ingram. They can stick with Tyrod Taylor or pick up Cam Newton or Jameis Winston for now.
# 7 – Carolina Panthers: Derrick Brown DL, Auburn

Unfortunately for the Panthers in this mock draft, Isaiah Simmons goes before pick number 7. They add Auburn product Derrick Brown who can play anywhere along the defensive line. Brown, a quick and powerful big man, will disrupt offenses at the next level and add another dimension to the Panther defense.

Becton is an absolute monster at 6-7 and 364 pounds. He will help protect their young quarterback Kyler Murray, and provide running lanes for Kenyan Drake. After adding DeAndre Hopkins this offseason, the Cardinals could have an explosive offense.

Lamb is a playmaker. His best comparisons have been to DeAndre Hopkins. He makes ridiculous plays after the catch and has incredible ball skills. Lamb, DJ Chark, Chris Conley, and DeDe Westbrook form an exciting wide receiver corps for Gardner Minshew or whoever the QB is.

Cleveland has the necessary weapons on offense and defense in order to be a successful team. It is up to Baker Mayfield to decide how their 2020 season goes. Their team could help Baker by improving their line by taking Wills, an incredibly athletic, physical lineman.