Brush and Palette • May 21, 2019 • https://lbhsnews.com/3358/entertainment/celebration-rocks-laguna-artists-theater/ 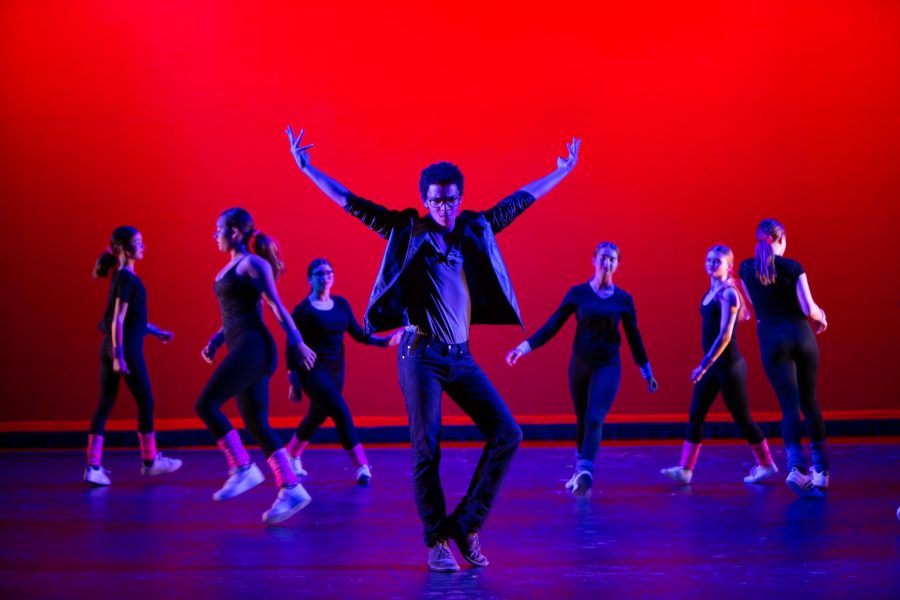 Most shows at Laguna Beach High School set a high bar for high school performances, but this evening’s dance show, entitled “Celebration,” set an entirely new standard. The creative use of light, directed by veteran stage technician turned Theatre Manager, Peter Roche, and the novel choices of music and dance numbers by Director Estee Fratzke were breathtaking. At the beginning of the show, Director Fratzke announced the graduating seniors who included Iris Sewell, Phoebe Radisay, Kiyara Tehrani, Hannah Abrahamson, Ruby Amodeo, Mia Brisker-Vines, Emma Gibbs, Lalia Garcia-Amini, and Nadine Maida. Additionally, even if it had not been noted in the show program, one could immediately know that professional choreographers had worked tirelessly to enhance the effect of this professional-level dance concert. This concert had something for everyone to enjoy.

“We spent months preparing, and I think all of the classes felt good about what they had to do. Choreography, costumes, lights, and sound all came together in the last weeks and then it was go time!” said Fratzke.

The twenty-seven total dance numbers truly evoked an overall feeling of celebration. A lot of the songs used had upbeat titles, but there was irony between the beat and the lyrics, and the way the dancers interpreted the songs. Fratzke took the opportunity of this dance concert to showcase her dancers’ range of talents and to set them against music with themes that, at times, were less than celebratory. The use of the various musical styles allowed the dancers to freely express themselves with the music as the backdrop to their talents. Also, the blending of several songs and music genres together in one number upped the energy level of this production.

The dance numbers ranged in style from ballet to modern, and from hip hop to jazz. An example of an energetic hip hop piece was Good Feeling, performed by Dance 1, in which the dancers exuded high energy with a rap-style dance while wearing bright yellow-and-black checkered hoodies. Another powerful hip hop piece took place in Act II, using the music of Ciara. Fratzke masterfully used her talented T.A., Anthony Ramirez, as a lead dancer to successfully execute a very challenging number. A final noteworthy hip hop style piece called Just Get Back Up Again used Chris Brown’s’ music in conjunction with an exceptionally choreographed number that celebrated genuine street vibes.

“It was a beautiful modern/lyrical type dance that was different from most of the stuff we were doing,” said senior Katie Palino.

The interpretive dance pieces were also noteworthy. In Act I, a solo by Radisay entitled Summer Games, was truly breathtaking, as was the solo by Sewell. Another noteworthy interpretive piece, entitled Not About Angels, featured Staci Ensminger executing a flawless and fluid routine on an aerial ring. In the piece Uninvited, Fratzke masterfully used an unassuming ukulele solo performing the music of Los Angeles Children’s’ Choir-trained Billie Eilish. The punishing, sweet-themed music, juxtaposed against the modern and ballet moves, made for a scintillating expression of dance. A final cool interpretive dance could be seen in A Breath of Requires, where the song “Your Day Will Come”, by Son Lux, was heard. This number started dark, and almost tribal. The piece was modern interpretive, with a song that was not only incredible but powerful and additionally very well choreographed with a complex sequence of movements.

Though rare, some of the performances featured elements of ballet that spun off into different forms of dance. In the piece Surrounded By No One, there were mainly ballet moves, but also modern and interpretive dance moves. Ballet was clearly an influence in the routines, yet not as prominent as jazz, modern, or the obvious hip hop style. Finally, ‘Nineteen, and, most remarkably, Girls’ Night Out were examples of modern dances. Girls’ Night Out was a high-energy, exciting, and overall super-fun number to watch.

“I feel like all the hard work put into rehearsal definitely reflected itself into the performance not only for myself, but for everyone else as well. I am extremely grateful for the time and energy they put into our dance program. It is not an easy task to choreograph a dance, and at times it can be quite stressful. I am so happy to have gotten to work with so many amazing dancers,” said Sewell.

A few other fun things that Director Fratzke included in the program were a choreographed piece involving high school senior dancers with their family and friends, a number performed by select staff members from the high school, and a throwback to 1989 complete with a Ferris Bueller voiceover. At the conclusion of the concert, Director Fratzke stated, “I am proud of everyone’s commitment and I am grateful the students believed in me, even when times were stressful. I am most proud of the seniors because I’ve seen their growth over four years and it’s always so rewarding. As dancers, choreographers, and young people, they’re demonstrating skills that go beyond dance like how to effectively communicate, collaborate, and create together. These are skills they can transfer to anything they choose to do and that makes me happy.”