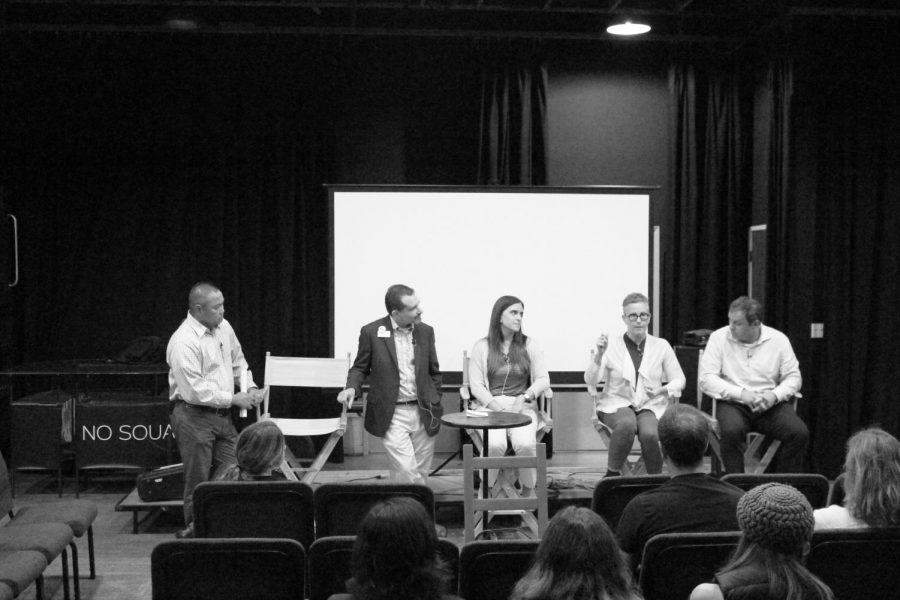 The school community, with the help of outside experts from the Anti-Defamation League (ADL), has come together to address recent instances of hate speech during school functions and to eliminate an element of discrimination on campus.

“In one incident, I experienced two kids in one of my classes telling me to draw a swastika on my paper. They thought it was extremely funny and laughed hysterically,” said the student.

After thinking about the incident for 24 hours, the student took it upon himself to address the issue with the students the next day.

“I decided to confront them in hope of educating them and letting them know how this is not funny. I told them that it is disgusting that they find this symbol funny and it is not okay. Fortunately, in this instance, they understood and apologized for their action[s],” said the student.

According to several more student reports, insensitive and discriminatory remarks are made regularly around campus.

“I have been at pre-season soccer practice on the field and saw several students doing ‘Heil Hitler’ and putting their hand up in the air in that gesture,” said a student who wished to remain anonymous.

Insensitive and uneducated comments often occur outside of formal settings in school environments, where students may feel less accountable for their behaviors.

“Anti-semitic jokes are made in the gym locker room about it being like the gas chambers in WWII,” said athletes who also wanted to remain anonymous.

In another recent instance, a “Heil Hitler” gesture was used by a student during a cross-country run. Upon learning of the incident, boys cross country coach Scott Wittkop responded swiftly.

“I called the athletic director. I then set up a meeting, and we discussed it as a team and as a group. I said that there was no place for this. There is no place for this in our culture…and we dealt with it immediately on the spot,” said Wittkop. “It has happened in most sports. I think it is done out of ignorance for the most part. I don’t think what was said was malicious, but we wanted to take it very seriously, and we wanted to deal with it immediately. In our program we don’t sweep anything under the rug.”

When situations regarding prejudice arise and are handled with the immediate attention and professionalism they deserve, these incidents can be turned into teaching moments.

Wittkop is not the only teacher trying to make a difference around campus. Social sciences teacher Kristin Cowles recently opened up her classroom (27) to the No Place for Hate Club that meets on Tuesdays during lunch.

“If students see or hear hate speech or symbols of hate speech on campus, it needs to be reported. Teachers and administration are committed to keeping LBHS safe for all students, but we can’t be everywhere and we can’t hear everything,” said Cowles.

Concerned students are encouraged to report incidents to teachers and administrators or to use Text-a-Tip to communicate their concerns.

Additionally, in an effort to educate the community, there was a gathering at Legion Hall in Laguna Beach on Thursday, Nov. 1. Students and community members viewed the documentary, “Documenting Hate: Charlottesville.”

Following the viewing, a panel of experts spoke and answered questions pertinent to discrimination of all kinds. The experts represented the ADL (Anti-Defamation League), CAIR (Council on American-Islamic Relations), LGBT Center OC, Human Rights Campaign-Orange County, and the OC Human Relations Commission. Also in attendance was a professor from Chapman University, Dr. Peter Simi, who specializes in this course of study and contributed to the documentary.

“We have to remember there is a difference between bullying and hate speech,” said Han. “No one should have to tolerate hate, ever.”

Laura Kanter from LGBT Center OC elaborated upon how deeply destructive hate speech can be.

“Words are impactful, and the suffering that happens is real. Saying hateful things to some, even just one word, over the course of a long time becomes like systematic micro-aggression or micro-terrorism,” said Kanter.

The panel educated the audience regarding how inaction in the face of hate speech, actions or symbols can be regarded as silent acceptance.

“Walking by a bench with a swastika on it and saying nothing is normalizing it. Not talking about things is being indifferent. Awareness is the first step. The only way to bring awareness to the issues or to a person is to say something,” said Josh Grushkin, a representative from the ADL.

Today, the ADL is fighting threats to our very democracy and contempt for anyone who is different.

“There is a rise in intolerance nowadays as we live in a world with a lot of exposure in media, TV, film, music, YouTube, etc. The internet can be a festering cesspool of hate, with a lot of social prejudices,” said ADL Regional Director, Rabbi Peter Levi.

Levi also provided insight to combating hate on campuses and in our communities.

“Practice zero indifference— don’t ignore. Be an ally, not a bystander. Support others who are from a different group than yours, because when one group is made to feel marginalized, then all groups are marginalized,” said Levi.