An LBHS drama production of The Diary of Anne Frank 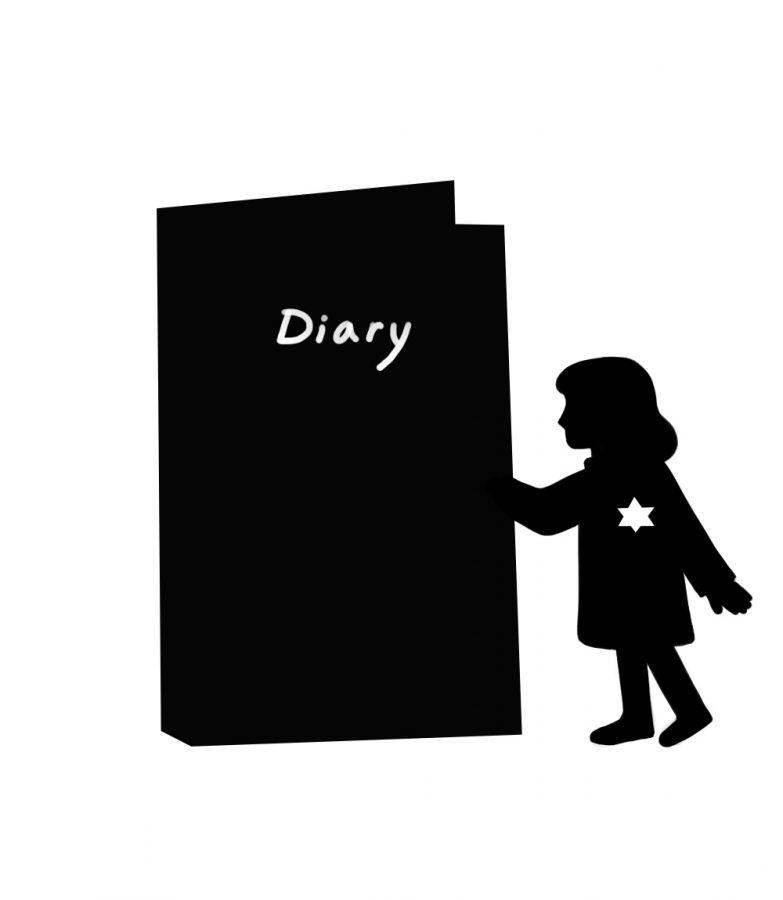 Later this month, LBHS Park Avenue Players will be performing The Diary of Anne Frank by Frances Goodrich and Albert Hackett, newly adapted by Wendy Kesselman. It reveals the timeless story of the Frank’s struggles during the Holocaust. Surrounded by darkness and uncertainty, Anne Frank brings light and joy to the family’s situation as she matures and finds her voice.
“The play captures the realities of their daily existence and the increasing horror of the unknown world going on outside. Anne Frank, a gifted and inspiring young girl, confronts her rapidly changing life with commendable honesty, passion and determination, which she expresses through her personal diary passages,” said director Celena DelPizzo-Howell.
After receiving a letter ordering their older daughter Margot to a German camp, the Franks find refuge in Mr. Frank’s old workplace, concealed behind a hidden door. Soon, the small space is crowded with eight people, and they all must learn to live together in their effort to stay hidden from the Nazis.
“The play is somber because you know what’s going to happen in the end, but it’s not depressing. It’s light-hearted at parts, and there’s humor that’s actually pretty funny. It’s a good play, and I think the audience will enjoy it,” said senior cast-member Nilson Wilson, playing the role of Mr. Van Daan.
The Holocaust happened over 70 years ago, and millions of people were murdered by the Nazis throughout Europe. In different works, plays, books, movies and personal accounts, the memory of those who lived during that time is honored.
“Anne Frank is one girl’s story, but she represents so much more. Watching the play allows us to see the humanity during this horrific time through individuals like Otto Frank, who tried to create a safe place for other families besides his own, and people like Miep or Mr. Kraler, who risked their lives to help. In my classes, I have students watch video testimony of Holocaust survivors, liberators, or rescuers in order to connect that first-hand experience with the factual history. The Diary of Anne Frank serves the same purpose. By reading a story, listening to a survivor’s testimony, or watching a play, you can somehow feel a little bit of what it was like and take that understanding and put it out to the world,” said TMS ELA teacher, Laura Silver, who teaches the play in her class and is contributing to the drama production.
With this new adaptation, the audience will discover more of Anne’s accounts, including intimate moments and elements of the Jewish culture that were not reflected in the original stage adaptation. Anne had begun revising her diary while in the annex and hoped it would one day be published. When agreeing to publication, Anne’s father released only certain passages, but with his passing the diary was reopened and additional passages became available to the public.
“It’s so fascinating to learn about such a prominent figure in history. I really feel that I’m growing as an actor and a person. I’ve really connected with my character, who was simply a little girl caught in the wrong place at the wrong time,” said freshman cast-member Claire Tigner, playing the role of Anne Frank.
The cast includes primary players and understudies for each role in case an actor is unable to perform.
“The fact that the cast is so small will really help to make an intimate feeling between the actors and the audience, and it also makes the show an extremely special experience for everyone involved,” said freshman Shelby Thomas, playing the role of Anne’s sister Margot.
In order to prepare for the spring play, auditions were held in April before spring break so the cast could start memorizing lines and begin rehearsals as soon as school resumed. The cast has rehearsed for the past month Monday through Thursday from 6 p.m. to 9 p.m. and Sundays 1 p.m. to 4 p.m. They will continue perfecting the play up until the real performances Friday-Sunday, May 25-27 in the Thurston Blackbox, Friday at 3:30 p.m., Saturday at 7:00 p.m. and Sunday at 2:30 p.m.
“Theatre is a powerful teacher of empathy, and the play allows the audience to spend an evening walking in the shoes of real people who withstood a harrowing experience. Obviously the play focuses on Anne, who quite bravely retained a positive mindset despite the horror which was going on around her and the constant fear that she and her family found themselves living in. Given we have found ourselves in the midst of another tumultuous time, historically speaking, I see it as a reminder to see the best in others, regardless of their actions, and to always hold onto hope, regardless of the challenges we face,” said LBHS Drama/Theatre teacher Alexis Karol.